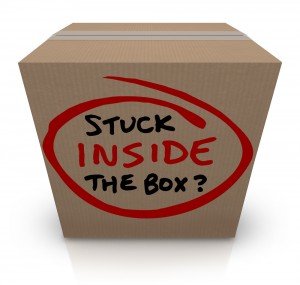 Leadership and Self-Deception: Getting Out of the Box by The Arbinger Institute presents a powerful model that is often used in executive coaching to improve a person’s leadership skills.  The model shows that when we do not honor our initial sense, we betray ourselves and “go into a box.”  In the box, we are incapable of looking at others and ourselves objectively.  We treat others as “objects”, without feelings for their humanity. This causes us to make the wrong leadership decisions.

Leading from “within the box” vs “out of the box”

Being “in the box” affects our leadership skills. For example, Jane – an executive – could ask one of her direct reports to complete a task.  If Jane is in the box, she might think that the employee is incapable of completing the task on time with the desired level of quality.  She might think, “I really can’t count on Sam to get this work done.”  Sam will sense that Jane doesn’t trust him to do the job and this will affect his confidence, his morale and, ultimately, his performance.

On the contrary, if Jane is not in the box, when asking Sam to perform the task, she is more likely to also ask him what challenges he might have in completing the assignment, with a genuine desire to help him be successful. In this case, Sam will feel like Jane cares about him and won’t feel like he is simply an object getting a task done.

How our “way of being” influences others

Leadership and Self-Deception teaches that when we communicate from within the box, others experience our perceptions, even if we don’t explicitly express them. The Arbinger Institute calls the feelings below our actions or communications, our “way of being,” explaining that we can either have a “heart at peace” or a “heart at war”.

This might sound like strange language for how executives express themselves on the job, yet it makes sense.  When we are annoyed at others or “in the box”, others sense that actually we have a heart at war and respond accordingly.  The way of being is always below our words and we can not disguise our true feelings, even if we attempt to communicate calmly and clearly.

Conversely, when we have a heart at peace, we are relaxed and think objectively about what the business and the people around us need from us. These are crucial leadership skills to have.

Johnny, an executive coaching client, received very positive feedback from informal interviews with his team and stakeholders. Everyone had tremendous respect for him as a visionary who had transformed his department within the last two years.

However, the feedback revealed that people felt that Johnny put his career ambitions before the needs of the organization.  He was shocked by this. Yes, he was an incredibly ambitious guy and had confided in me that if the organization didn’t meet his career goals, he would find another opportunity.

However, he thought he always kept his ambitions to himself and was surprised to find that people recognized that about him. Johnny’s ambition was his “box”, which influenced his way of being, and that came through in much of his communications and ultimately affected his leadership skills.

As part of the coaching, we decided that he should focus on delivering on his vision for the work – something he had been recognized for with a promotion – while making a genuine effort to put his personal ambition aside.  He changed his perspective from thinking it was the organization that had to deliver his career goals, to believing that delivering good work and leadership would help him get there.


His way of being and how he approached the job shifted and his leadership impact improved significantly.

We cannot prevent ourselves from going into a box. However, we can build greater self-awareness, which will limit the amount of time we spend in the box and help us find more positive ways of connecting with others.

When combined with coaching, Leadership and Self-Deception by the Arbinger Institute can help you recognize your own boxes and how they might be sabotaging your leadership skills.

Contact me if you want to know more about how I use this tool for leadership development.