When it comes to leadership impact, what a leader perceives doesn’t always match reality. We may be aware of it or not, but our thoughts can keep us from seeing things clearly and delivering more powerful results.

A LEADER WANTING TO IMPROVE

Mary is a successful senior leader running the Midwest office for a global consultancy. Her coaching goal was to take her leadership skills to the next level.

Over the years, Mary has consistently produced strong client work and is well known around the world as a well-respected speaker in her industry.  As a leader of others, however, Mary has a habit of holding back her concerns about other people’s work.  Instead of discussing the issues openly, she would end up producing the client work by herself at the last minute. This pattern of thinking and behavior significantly reduced her leadership impact, creating tremendous stress for her, limiting team collaboration, and generating work only from her perspective instead of that of the entire team.

At the start of the coaching, we used The Leadership Circle™ 360 tool to collect feedback from Mary’s bosses, direct reports, peers and other key stakeholders. The goal was to understand how they rated her leadership impact. The feedback the tool provides is rich and multilayered and gave us a clear picture of the direction for Mary’s development needs.

The assessment told us that Mary had tremendous leadership potential that was not matched by her actual leadership impact.  For real transformation to happen, we needed to improve her awareness of what was limiting her effectiveness.

For example: Mary is well intended but the feedback showed she was not quite as good as she was rating herself in terms of her leadership impact. She had large blind spots about her ability to relate to others: she ranked herself much higher than her peers and reports.  Her stakeholders mentioned they wanted to hear her perspective more often and earlier on during projects.

The assessment also showed us that Mary was holding back, not able to be her authentic self with her boss and direct reports. This didn’t surprise her; she admitted feeling more relaxed and safer with co-workers she considered her peers.

A FOCUSED APPROACH TO CHANGE

Based on the feedback, we chose to focus on two areas that the Leadership Circle tool calls “Courageous Authenticity” and “Decisiveness.” 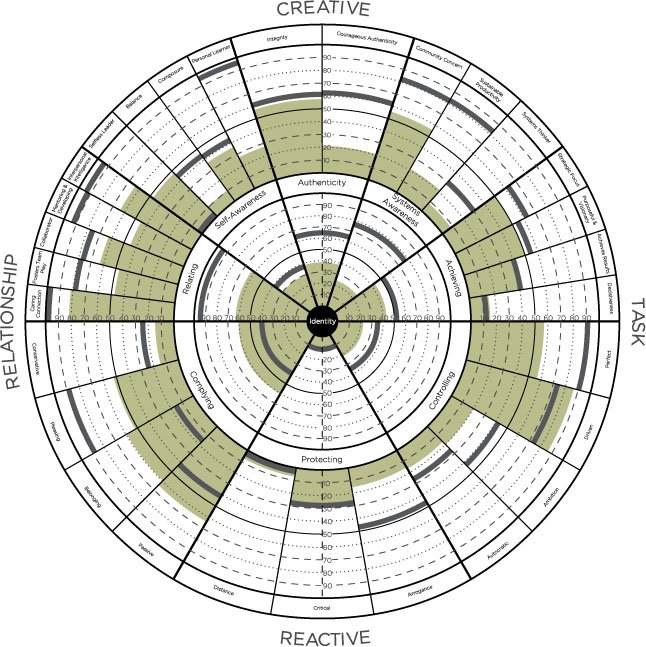 Courageous Authenticity measures a leader’s willingness to bring up the “undiscussables” with others.  The good news was; Mary already was regularly interacting with her peers in this way. So, we worked on helping her relax and trust herself to be candid and honest all the time, so that her boss and direct reports could see that side of her too.

Decisiveness measures the leader’s ability to make decisions on time and move forward in situations of uncertainty.  Mary would ponder the work for long periods of time, avoiding collaboration with others, only sharing her vision toward the end of the project.  So, we decided she would work on:

Mary acknowledged that this approach was outside her comfort zone and it would take real intentional focus for her to break from her way of doing things.  She committed to taking the steps to change because she wanted to deliver greater leadership impact.

Mary decided to share the results of her leadership assessment with her direct reports and engage them in a conversation about how she could be a better, more honest and communicative boss to them.  That was a huge first step in embracing her authentic self with them!

HOW ABOUT YOUR LEADERSHIP IMPACT?

How is your leadership impact?  Do you know if how you perceive yourself as a leader is the same as how your colleagues and reports experience your leadership?

Contact me if you’d like help in finding out and developing ways to get your leadership to the next level.