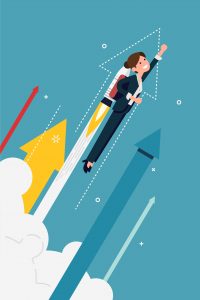 When a company experiences sudden fast growth, its leadership is tasked with managing the new reality; something they might not have the talent and skill to deliver.

A company that owns and manages senior living facilities has been growing at an astonishing rate, going from 15 to 30 properties in the last two years. The situation is requiring everyone in the company to perform at a much higher level than was expected when they joined the company.

While the new opportunities are exciting, they are creating an extremely stressful environment for all. That’s especially true for the company leaders, whose roles are changing to be able to manage the fast growth.

Two of these leaders recently engaged in a series of Executive Coaching sessions with me to focus on their leadership development.  Both are executives who were originally hired as functional experts, in Human Resources and Operations. However, the sudden growth has called upon them to shift their orientation from getting the work done to hiring and leading regional managers and building functional teams. The new role has been challenging for them.

Executive Coaching has given these two leaders the space to discuss and create views of themselves at the higher management level where they are now. This was done through a 3-step process:

As a result of the coaching, the leaders are now engaged, energized and able to embrace new approaches to support their ever-growing teams.  Days are still intense and can be long, but as one said, “I see light now, where there was none before!”

Are you  working to manage fast growth or changing realities as a leader of your company? Let’s talk.